New Infrastructure has always been the foundation of large transformations.

Autonomy is the next industrial revolution. It requires the bridging of the physical and the digital. The convergence of Edge Computing, 5G, ITS, and IoT are widely seen as the technologies that build that bridge. Investment in a 21st-century Intelligent & Autonomous Infrastructure is among the highest priorities for stimulating economic expansion, national security, and job growth.

Edge computing, 5G wireless, Intelligent Transportation Systems, and resilient electrical grids will drive the largest infrastructure buildout in our nation’s history. It will drive a massive resurgence of manufacturing, engineering, construction, installation, programming, and jobs of the future. 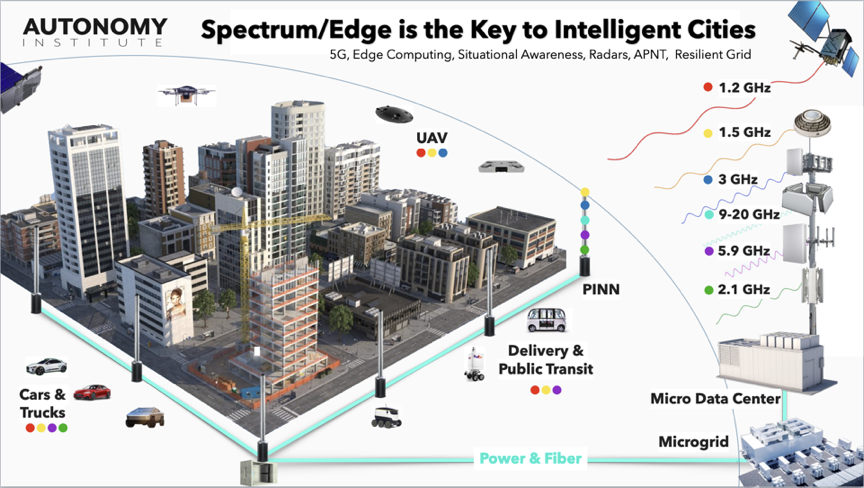 This next generation infrastructure will enable the Digital and Autonomous World and drive the next trillion-dollar economic expansion. This infrastructure will create Highways and Byways in order to support more efficient mobility, automated city services, autonomous cars and trucks, autonomous shuttles, air taxis, inspection drones, and many intelligent city applications.

The difference about this infrastructure is the requirement to be densely deployed on the sidewalk. A Unified infrastructure supporting Integrated City Services, Autonomous Systems, Commercial Use Cases beneficial to the community, and National Security and Privacy.

Time to build our Digital Infrastructure

Sufficient public and private research has been done to transition to infrastructure deployment. A dozen States have already enacted legislation, created testing centers, and supported proof-of-concepts or pilots. The National Science Foundation has funded autonomy research at universities across the nation. Companies are spending billions of dollars on the development of autonomous systems that will require Intelligent and Autonomous infrastructure. Cities, including Denver, Colorado, Austin, Dallas, and Pittsburgh, Pennsylvania, are exploring ways to understand what an appropriate infrastructure would be for them.

The Intelligent and Autonomous Infrastructure will pursue a series of Public-Private Partnerships (P3s). The P3s (various forms – Design, Build, Finance, Operate, Maintain) could go to a city, State or region, or to a consortium for local development or to a company that has the appropriate civic partners. The program manager can decide which structure is best for a given locale.